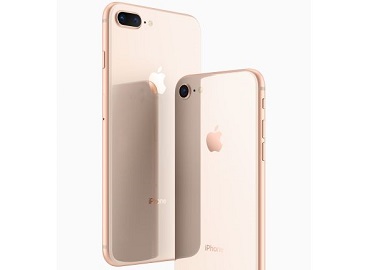 iPhone 8 and 8 plus, the phones overshadowed by iPhone X

Apple has finally announced the whole new generation of iPhone 8 and iPhone 8 plus here in California today. The new iPhone device features a new set of features such as new design having glass and aluminum and that has been made in three different colors. Other amazing features like Retina HD display and the introduction of an A11 Bionic chipset.

Both the devices, iPhone 8 and iPhone 8 Plus will be available for pre order starting 15th September and the shipping will start on 22nd September.

Before giving you the detailed specifications of iPhone 8 and iPhone 8 plus, this is what Philip Schiller-the senior vice president of Apple worldwide marketing said at the launch:

Now let’s have a detailed look at the features of iPhone 8 and iPhone 8 plus:

Apple has introduced a new glass design that has been made with highly durable glass and it is available in three colors named: Space Gray, Silver, and Gold.

The glass design has been manufactured with a seven layer color process and this makes it water and dust resistant.

iPhone 8 and iPhone 8 plus get newly redesigned speakers that are 25 percent louder and they also have the ability to deliver amazing deep bass and rich sound music on videos and calls.

The power engine behind all the activities of iPhone X. The A11 Bionic is the most powerful chipset used in any smartphone device. The feature of this A11 Bionic chipset are given below:

The camera also has the ability to give a highest video quality recording and better video stabilization.

The glass back design of iPhone X enables this device towards a wireless charging system. Apple also gave a glimpse of a device called Airpower that will be coming in 2018. This device will help the users to charge their iPhone 8, iPhone 8 Plus and Apple watch series 3 and iPhone X to charge simultaneously on the accessory.

iPhone 8 and iPhone 8 Plus comes with iOS 11 that gives major improvements in portrait mode.

iOS also bring AR to the devices that help the developers to make AR apps. Siri gets a new male and female voices that are said to have a better expression.

This was all about the new iPhone 8 and iPhone 8 Plus. For more updates on the Apple products, stay tuned with KNine Vox. Don’t forget to follow us on Twitter and Facebook.