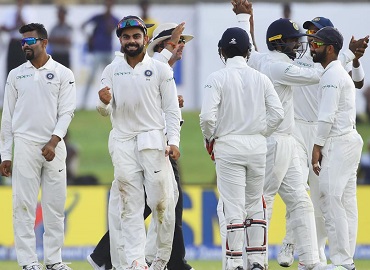 Today both India and Australia completed their first wins of their respective series against Sri Lanka and England. Sri Lanka is touring India and after getting a hard-fought draw in the first match, they could replicate that in the second test and lost, whereas England and Australia are playing Ashes series.

But the players in limelight were mainly Virat Kohli and Steven Smith in their respective matches. Smith scored a slow and steady century in the first innings when his team was under pressure. Virat, on the other hand, took advantage of the Sri Lankan bowlers who were on the backfoot as Vijay and Pujara have already scored a century and Kohli took an aggressive approach to complete his double century.

In both the matches the captains broke some records, Kohli surpassed Don Bradman to become the captain with most double centuries, he is now matched with Brain Lara. Smith also surpassed another batting legend Sachin Tendulkar to become third fastest batsman to score 21 centuries.

Talking about the India vs Sri Lanka match: From the very start Indian pacers were troubling Sri Lankan batsmen, especially Ishant Sharma and they were all out for only 205 runs on the board. Indian team took this opportunity and scored a massive 610 runs before declaring which consisted of 3 centuries and a double century. Sri Lanka team was under immense pressure in the second innings and crumbled for just 166 runs, thus providing India with their biggest winning margin.

England vs Australia: England was dominating in the first innings as their top order piled some runs and got them to a total of 302 runs, but thanks to the century from Steven Smith Australia got over England’s first inning total and got a lead of 26. When England came out to bat the second time they were bowled out for a mere 195 and a target of 170 runs proved to be piece of cake for Australian batsmen as they achieved the total without losing any wickets.