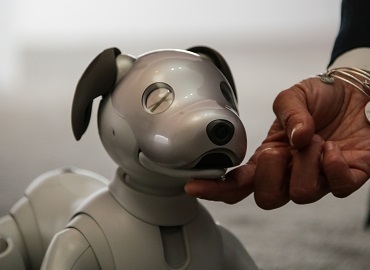 Sony’s presence at CES 2018 was going to end with nothing and was not even by their own standards, but they saved the best for the last. It was long awaited return of Aibo – the robotic dog from Sony. It was the cutest moment of CES and it made the room full of tech bloggers go “aww”.

It was extremely obnoxious conference from Sony, until the representatives brought a couple of robo puppys, into an artificial living room space. And it was amazing to see how much has Sony improved on their product, it was a better AI and better mechanics.

It is surprisingly like a real life pup and initially the first difference is going to be plastic coating. The robo dog performed really well in front of the crowd, it recognizes its master’s face, responds to touches and back scratches and will obey your sit commands every few times.

And then there are the eyes, the most surprisingly effective eyes, which many folds the cuteness of the pup. The price is even a fair one which is about $1,735, but the price for now is released for only Japanese release robo pup, and beside the standard price there is also a $26/month service fee.

We hope that company maintains the state of these robots and does not let them disappear in the oblivion.