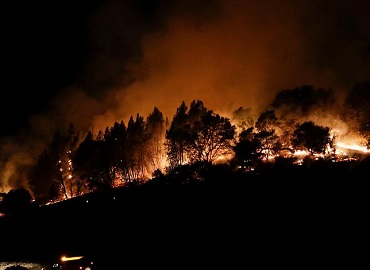 Humans are making wildfires worse, but here’s what we can do about it

A wildfire or wildland fire is a fire in an area of combustible vegetation that occurs in the countryside or rural area. Depending on the type of vegetation where it occurs, a wildfire can also be classified more specifically as a brush fire, bushfire, desert fire, forest fire, grass fire, hill fire, peat fire, vegetation fire, and veld fire.

Climate change is a major contributing factor in the uptick of firestorms. As our planet continues to warm and weather patterns become more unstable—and as humans keep developing more land—experts expect that devastating fires like those currently searing across California’s wine country will become the norm, not the exception. But the summer that followed was oppressively hot—the hottest on record in parts of Northern California that are currently burning, according to NOAA’s National Centers For Environmental Information:

Since the winter rains ended, much of California has been bone dry. Summer and fall are traditionally dry seasons in California, but this year has been drier than usual:

Park Williams, a bioclimatologist at Columbia University, wrote for a recent study.n

Climate is really running the show in terms of what burns. We should be getting ready for bigger fire years than those familiar to previous generations.

Climate change is so dangerous because we’ve put billions of people and trillions of dollars of property directly into harm’s way. Lake Berryessa from the County Fire, which burned through more than 90,200 acres in Northern California before it was contained in mid-July.

According to National Geographic, when camping, take care when using and fueling lanterns, stoves, and heaters. Make sure lighting and heating devices are cool before refueling. Avoid spilling flammable liquids and store fuel away from appliances.

Do not discard cigarettes, matches, and smoking materials from moving vehicles, or anywhere on park grounds. Be certain to completely extinguish cigarettes before disposing of them.

Follow local ordinances when burning yard waste. Avoid backyard burning in windy conditions, and keep a shovel, water, and fire retardant nearby to keep fires in check. Remove all flammables from the yard when burning.