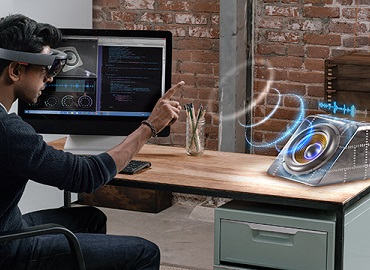 Microsoft today announced its next generation of HoloLens which will have custom built-in AI chip. The custom silicon chip will be used to analyze the data on the device itself instead of uploading it to the cloud and this will lead to a better performance. Microsoft wanted to keep the device as mobile as possible and for this they designed the custom AI chip, however, the chip will not be manufactured by Microsoft.

Today’s devices are not meant to handle programs like AI and if they run these programs they consume a lot of battery and the performance is not that good. This has been a trend among Silicon Valley’s companies that have been trying hard to meet the computational demand of AI.

According to Microsoft running AI directly on the mobile or any device like AR headsets have many advantages, first of all, is the performance as devices don’t have to upload data to servers. This in turn will improve the user experience as user will not have to connect the device to a continuous internet connection and provides an impression of secure processing as users’ data never leaves the device.

Apple has been doing the same as it is building AI for its iPhone – Apple Neural Engine, and now Microsoft is doing it for its HoloLens. In fact, there are two possible ways to do so, one is by creating a special lightweight neural network and the other is by creating custom AI processors, architectures, and software which is what Qualcomm and ARM are doing.

Microsoft research engineer Doug Burger spoke to Bloomberg that they were taking the challenge of creating AI processors servers very seriously. He also said that their aspiration is for being number one AI cloud.

AI coprocessor will be built in Holographic Processing Unit (Microsoft’s central vision processing chip) of HoloLens 2. Still, there is no information about the release date of HoloLens 2 but we can predict it to be launched in 2019.