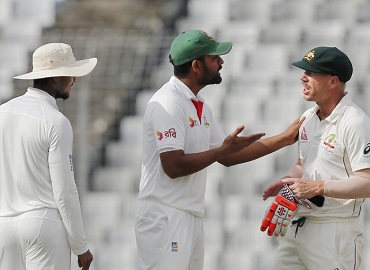 The Bangladeshi superstar batsman Tamim Iqbal was fined 15 percent of his match fees for the account of his verbal exchange of words with Mathew Wade during the 1st test match between Bangladesh and Australia at Dhaka.

Tamim was imposed this fine was he was held guilty for exchanging verbal words with Mathew Wade when Wade was changing his batting gloves again and again. Tamim was also charged for verbal exchange between him and the umpires. When Wade was dismissed by Shakib, Tamim had approached the Australian wicket keeper batsman and gestured him his way towards the pavilion.

Tamim had scored brilliant 71 and 78 in both innings as Bangladesh registered their first ever test win over Australia. Bangladesh won the 1st test by 20 runs.

Shakib Al Hassan was adjudged as man of the match for his brilliant all-around performance with both Bat and Ball. Shakib Al Hassan also made a record of having 5 wickets haul against all the teams after the names of Muralitharan, Rangna Herath, and Dale Steyn.

The next test will start on 4th September at Chittagong where Australia is expected to give a strong fight back and Bangladesh will look to continue their good performance to white wash the 2 match test series by 2-0.

This was all about the sports update today. Stay tuned with KNine Vox for more updates from the world of sports. Don’t forget to follow us on Twitter and Facebook.