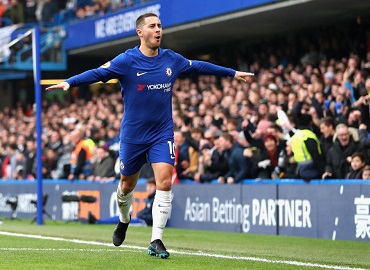 Real Madrid manager Zinedine Zidane will use the Belgian’s contract situation at Chelsea, with two full seasons left, to make him a Galactico. Hazard was left out of Saturday’s starting XI against Stoke, and was an un-used substitute as the Blues cruised to a 5-0 victory.

Hazard’s current terms expire in 2020 and Real can crank up the pressure on the Premier League champions to sell. They know Hazard’s value will drop dramatically when if he gets within a year of his deal expiring, which gives Chelsea a massive dilemma on whether to cash in.

Last week Hazard’s dad Thierry gave an interview to a Belgian newspaper saying Eden is waiting to hear if Madrid want him. Thierry said: “Eden has refused a contract extension to able, if necessary, to follow interest from Real Madrid.”

He also confirmed there had been “no contact” from the Spanish champions yet. Chelsea are ready to make him the highest paid player in Premier League history with a new contract extension worth £300,000 a week.

Hazard, 26, has been targeted as a player to help Real catch Barcelona after falling well behind them this season. Hazard’s idol as a kid was current Real boss Zidane and he has insisted it would be a “dream” to play for him.

In November he said: “Everyone knows the respect I have for Zidane as a player, but also as a manager. He was my idol. “I do not know what will happen in my career in the future. However, for sure, to play under Zidane would be a dream.”