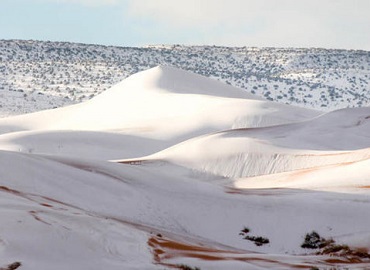 In a rare turn of events the Sahara desert which is known for its ferocious heat is now covered in thick ice, turning red sand dunes into white blanket. This happened in a small town Ain Sefra of Algeria and this is approximately 40 years since it snowed there.

It used to be over 37C in summers but local residents were amazed to see dense snow settled on the town.

Before that, snow was last seen in Ain Sefra on February 18, 1979, when the snow storm lasted just half an hour.

The cold snap comes as Europe and the United States froze in bitter temperatures.

Winter Storm Grayson, battering the US east coast, has seen the sea freeze in Cape Cod, along with the Niagra Falls in stunning scenes.

A spokesman for the Met Office said this morning: Cold air was pulled down south in to North Africa over the weekend as a result of high pressure over Europe. The high pressure meant the cold weather extended further south than normal.

In January temperature in that region remains about 6C. Sahara Desert covers most of the Northern part of Africa and has many shifts in its temperature and climate over past hundred thousand years. Although for now it is dry and humid in most parts and is supposed to be green in about 15,000 years.