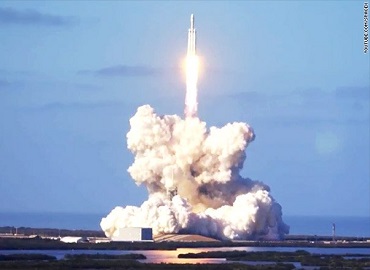 SpaceX Falcon Heavy can aid in mining of asteroids

Since SpaceX successfully test fired their Falcon Heavy rocket a few weeks ago, various space organizations have got a reason to smile. Why not? The Falcon Heavy will give a boost to multiple planned space missions that were technologically not feasible until now, literally. If Elon Musk could launch a Tesla roadster into space with a dummy space explorer into a Martian orbit, various other ambitious projects could also be initiated, including mining on asteroids.

Martin Elvis from the Harvard-Smithsonian Center for Astrophysics said in a conversation with Gizmodo that the Falcon Heavy can actually make it possible to realize the dreams of performing asteroid mining. He believed that the Falcon Heavy has enough grunt to deliver tons of mining equipment to an asteroid ripe with precious minerals, which can be brought back to Earth and utilized for several applications.

Several asteroids have been found to contain some extremely precious minerals such as Platinum, which is a rarity on our own planet. Some have even claimed to find water on one of these lifeless rocks encircling the sun. However, asteroids aren’t as easily accessible as most of the planets in the solar system, which is why mankind can land only on certain asteroids. Scientists use delta-v to determine how easily an asteroid can be accessed — asteroids delta-v can vary between 4 to 30km/s.

Elvis believes that the Falcon Heavy can achieve the required delta-v and manage to land the equipment easily on an asteroid the size of a football field — this could let miners gain access up to 45 per cent more asteroids.

Of course, it also depends on a lot of other factors such as the availability of the required technology and human’s expertise to land tons of payloads on a small rock while adjusting thrust between low-Earth orbit and an asteroid’s orbit.

Nonetheless, it is known that humans can make it possible to bring in minerals from asteroids, considering the Falcon Heavy’s first successful test fire. By the time the rocket is at its full commercial services within a year or two, interested parties could be pumping funds to develop such technology in the near future.