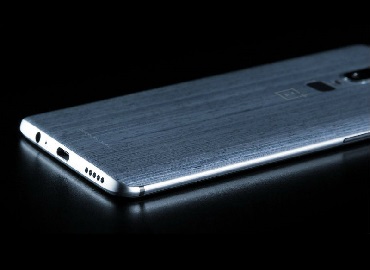 OnePlus is ready for their next flagship release with OnePlus 6 tipped to be released in Q2 2018. Previous OnePlus flagship 5T is already out of stock in the US, so it may be sooner than we thought that OnePlus will come out with their next device.

Popular leaker Evan Blass came out with new alleged images of OnePlus 6 and you can notice some obvious changes in the device. The image shows the back of the device and we can notice a wood textured rear. But OnePlus has decided to keep the headphone jack at the bottom and a similar USB Type C port and speaker placement.

You've been **cough cough** good sports with this, so I suppose you do deserve /something/. Just remember: #yousawitherefirst pic.twitter.com/AWCHYZKJJE

The leaked image also reveals that this time the camera will be positioned vertically instead of being horizontal. It also shows the newly designed rectangular fingerprint scanner. Besides this Carl Pei has already confirmed that OnePlus 6 will support the iPhone X style notch which is becoming a common feature in smartphones these days.

Evan Blass has been a very reliable leaker so far, and so we can be sure that these initial looks would really mean something.