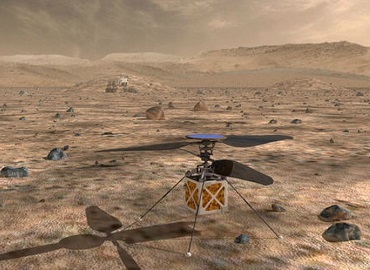 NASA will be sending a helicopter on Mars in 2020

NASA will be sending its second rover to Mars in 2020, but along with that, there will also be a flying chopper to get the bird’s eye view of the Mars. The flying vehicle is named the Mars Helicopter and will be accompanying the Mars 2020 rover, which is the successor of the Curiosity rover.

NASA has been working for the past four years on the design of the Mars helicopter at its Jet Propulsion Laboratory, but the space agency had to decide if the inclusion of the copter was a feasible idea and if the agency had enough money to send it along the Mars 2020 rover. But, now it seems that NASA has decided that the copter idea could actually work.

The copter will try to fly in the Mars atmosphere where the air is 100 times thinner than that of Earth. If the copter is not able to fly, it will not disrupt the NASA’s mission as Mars 2020 rover will be active. But if the copter actually flies than it would capture a rare bird’s eye view image of the Mars with its two cameras, and it will mean that there is a possibility of sending more flying rovers on Mars in future and accessing the parts of the terrain which were earlier inaccessible.

NASA has a proud history of firsts. The idea of a helicopter flying the skies of another planet is thrilling. The Mars Helicopter holds much promise for our future science, discovery, and exploration missions to Mars.

The Mars 2020 rover will be launched on top of an Atlas V Rocket made by United Launch Alliance from Cape Canaveral in July 2020 and will land on Mars in July 2021.