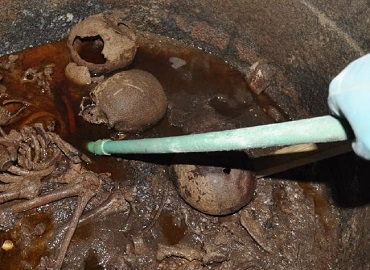 There were said to be arguments for and against opening Egypt’s new mystery sarcophagus. We don’t know who or what is in it, and nobody has opened it before, which means humanity is facing a mineral.

A mysterious, black, granite sarcophagus discovered in Alexandria, Egypt, dating to a time after Alexander the Great conquered the area in 332 B.C., has been opened.

There was speculation at the time the discovery was announced earlier this month that the massive coffin held the remains of Alexander and that opening the sealed and foreboding-looking box would unleash a curse. Neither seems to be true … unless stinky sewage causes some sort of torment.

Some people have weird desires and different tastes. They may even die after drinking it or may have some health problems. People who believe in all types of superstition things may say that it will give them the ancient superpowers of the Egyptians.

Someone launched a petition on change.org to “let people drink the red liquid from the dark sarcophagus.” The author, who goes under the name of “innes mck,” believes the “skeleton juice” should be made into “some sort of carbonated energy drink.

The sarcophagus, which is nearly 9 feet long, 5 feet wide and 6 feet tall (2.7 by 1.5 by 1.8 meters) — the largest found in Alexandria — was discovered with a thick layer of mortar covering much of it, Mostafa Waziri, secretary general of Egypt’s Supreme Council of Antiquities, said in a statement released by Egypt’s antiquities ministry.

People have human’s rights and government cannot violate that. Let’s see what happens at the end about that petition filed for drinking that 2000 years old bone juice.