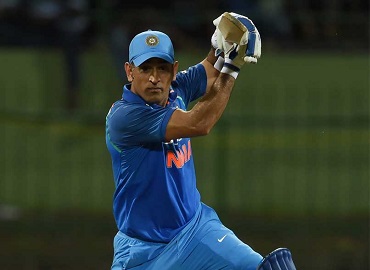 India has very well sealed the series victory against Sri Lanka in the ongoing ODI series as they have already won 3 ODIs out of 5. But cricket fans have also something else to look out for in the 4th ODI as the former Indian captain MS Dhoni is on the verge of setting two world records.

The upcoming ODI would be Dhoni’s 300th ODI and with two remaining matches, Dhoni could very well go past some existing records. In his 299 ODIs Dhoni has equaled Kumar Sangakkara’s record of most stumpings at 99 and on Thursday Dhoni could be the only person to reach that three figure mark for stumpings in ODI history.

The other record that he could set is with the bat, Dhoni has a total of 72 not outs in ODI which is on level with Shaun Pollock and Chaminda Vaas for most ODI not outs. Now one more unbeaten inning will grant Dhoni this record also.

So far Dhoni has played 299 ODIs and has scored a total of 9608 runs with 65 fifties and 10 hundreds and not only that he is the only captain to guide his team to all the ICC tournament wins. Dhoni has been part of some crucial innings that guided the team to victories. Even in the recent two ODIs against Sri Lanka Dhoni played two innings that helped India in winning the matches.

Dhoni has been delivering not only with the bat but also with the gloves as he has been providing crucial stumpings thanks to his lightning fast reflexes.

Indian chief selector MSK Prasad made some comments citing Dhoni’s future and his performance. But it seems like Dhoni’s current form has once again proved everyone wrong. There were also speculations as that a probable alternative would be considered in place of Dhoni for ICC Cricket World Cup 2019, but now it seems quite highly unlikely.

Former Indian cricketer Virender Sehwag was all praises for Dhoni and said that “a suitable replacement for him is yet to be found”. Sehwag told PTI that the experience that Dhoni brings is invaluable:

I don’t think anyone can replace Dhoni at this point of time. Rishabh Pant is good but he would also need time to replace him. But that can only happen after 2019. It’s then when we should think about Dhoni’s replacement. Till then let Pant gain experience. We should not worry about whether Dhoni is scoring runs or not. We should only pray that MS Dhoni is fit till 2019 World Cup. The experience that he has in the middle and the lower middle order, no one has that.

Here at KNine Vox we try to provide you quality news on different topics from technology to entertainment, but to reach out to a bigger audience we would like your support.

Help us by supporting us on Patreon, as this would provide us with required financial support. Those who will pledge any amount will get certain benefits. Visit patreon for more details.

Apart from this we believe that collaborating and having partners with some professionals or experienced organizations will certainly provide a boost to our website and our website could end up as a profitable investment. Do reach out to us for further queries