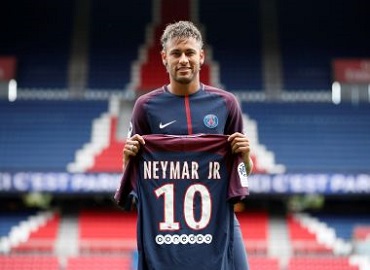 Neymar moves to PSG with a record breaking transfer fee

Neymar has officially left FC Barcelona to join his new club PSG for a transfer fee which seems to be an extravagance and is almost double the previous record fee. Neymar on this occasion addressed that he moved in search of a new challenge, happiness, and titles.

Earlier Paul Pogba was transferred to Manchester United for €105 million but now the PSG went way ahead of this transfer fee and made Neymar deal for a dazzling €222 million and possibly a salary of €30 million (after tax). Well, this deal has certainly come under some criticism as many are regarding this as a move purely motivated by money.

In the year 2000, a similar controversial transfer of Luis “Judas” Figo happened from Barcelona to Real Madrid, and Neymar’s transfer would be reminding many Barcelona fans how money plays a major role in the game of football.

“It’s sad people think Paris Saint-Germain move was motivated by money”, this is what Neymar told on his world record transfer fees.

But anyone at his place would have done the same, he was offered a huge amount by one of the biggest clubs in this world for his favorite position. He is now under a bigger responsibility and is the player who is going to drive PSG team.

Neymar would have wanted to move away from the shadow of Lionel Messi – one of the greatest in football and there is no denying it. Neymar was second fiddle during his time in Barcelona and there was nothing wrong when you have a great like Messi, but with all the talent that he possesses, he would surely want to make an image for himself in the history of football.