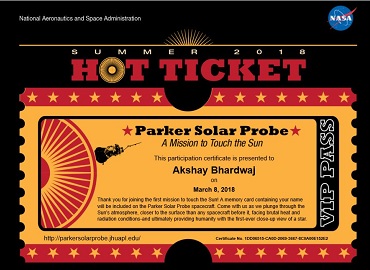 Send your name to the sun with NASA’s solar probe

NASA is all set for its mission to get a probe around the sun, but besides that NASA also wants the general public to be part of this historic mission. NASA has launched the “Hot Ticket” program which will allow the public to get their names on the Parker Solar Probe in a tiny memory card.

It is a symbol of appreciation from NASA for its space fans and it is actually really cool. To get your name registered, you have to enter your name and email on NASA’s sign up page. You will then receive a confirmation email on which you’ll find a link, click that link and you will be confirmed to have your name registered. You can download the digital ticket from there.

The Parker Solar Probe which will be sent on the journey will face the harshest conditions by a spacecraft till date. A four inches heat shield will protect it from the Sun’s extreme heat. It will orbit at a distance of 4 million miles and will face a temperature of 2500 degree Fahrenheit, but according to NASA the equipment inside the probe will remain at room temperature.

The information gathered from the probe will be sent back to earth to properly study how the Sun works. The probe, which is about the size of a small car, will make multiple loops around the Sun during its mission, inching ever closer while gathering data about the star’s magnetic field and atmosphere.