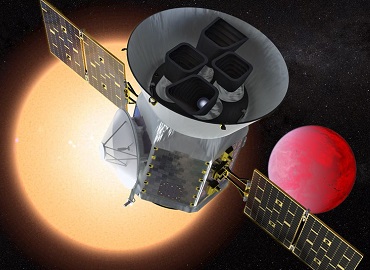 NASA’s new space telescope will look out for alien life

NASA is ready with their new space exploration program, but this time they will be hunting for planets consisting of alien life. NASA will be launching a new space telescope TESS – Transiting Exoplanet Survey Satellite. The task for TESS is going to hunt for alien planets.

The satellite will launch on 16th April and it took 10 years in the making of the satellite and it is one of the best opportunities to find one of the planets hosting alien life.

What differentiates TESS from others is the fact it is specifically designed to locate other planets which are of the size of Earth and are revolving around stars in the habitable zone, this is the zone where the water could be sustained on the planet’s surface.

TESS is opening a door for a whole new kind of study. We’re going to be able to study individual planets and start talking about the differences between planets. The targets TESS finds are going to be fantastic subjects for research for decades to come. It’s the beginning of a new era of exoplanet research.

TESS will be surveying the sky for two years and the data will be used by James Webb Space Telescope (JWST), which will be hopefully launched by 2020.

JWST which is the successor for Hubble telescope will be able to look into the atmosphere of these planets and could answer the question whether the planet is habitable or not. Well, this would at least theoretically mean that life could exist.

TESS is really exciting for scientists and this could also lead to the interest of the public in search of alien life.