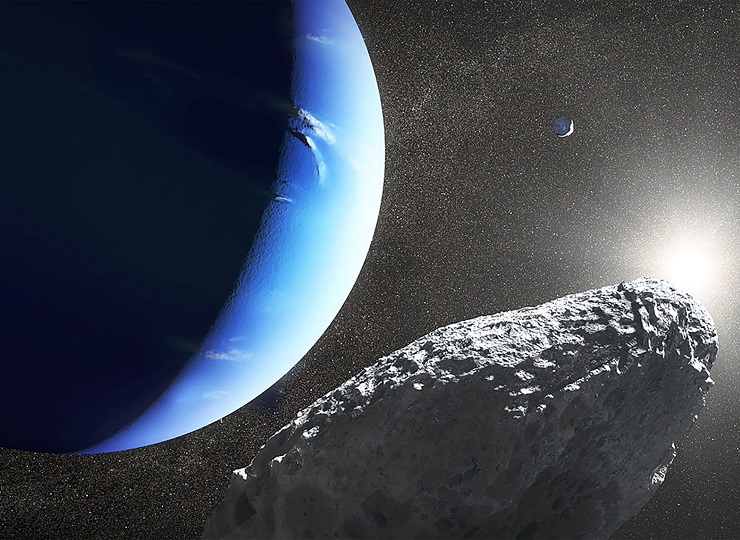 A newly discovered small moon of Neptune is coming into clearer focus as astronomers have now pinpointed this tiny rock’s orbit and where it might have come from. The moon’s existence heightens the possibility that there are even more tiny worlds around Neptune that we just haven’t seen yet.

The newly characterized moon — Hippocamp, named after a mythical half-horse, half-fish sea creature — is the smallest moon yet discovered in orbit around the outermost planet. NASA says the 20-mile-wide moon is about 100 million times fainter than the faintest star that’s visible to the naked eye.

Hippocamp was first seen in photos taken by Hubble in 2013. But its presence — situated close to a much larger moon known as Proteus — posed a mystery: Why hadn’t Hippocamp coalesced with or been cast aside by Proteus, an irregularly shaped, 260-mile-wide moon that is roughly 1,000 times more massive?

“The first thing we realized was that you wouldn’t expect to find such a tiny moon right next to Neptune’s biggest inner moon,” said Mark Showalter of the SETI Institute in Mountain View, California. “In the distant past, given the slow migration outward of the larger moon, Proteus was once where Hippocamp is now.”

Finding Hippocamp was an unexpected discovery, too. Back in 2013, Showalter was poring over pictures from Hubble in order to study the weird features around Neptune known as arcs. The arcs are thin rings, like those around Saturn, that don’t connect all the way around Neptune. The problem with studying these rings is that they’re very faint and they move very quickly, which makes them hard to capture with cameras from Earth. Fixed, long-exposure images that bring in extra light ultimately blur the arcs out.

Hippocamp’s orbit brings the moon very close to a much bigger moon of Neptune called Proteus, which is 130 miles across. And based on their analysis, Showalter believes that Hippocamp is probably a piece of Proteus that was broken off billions of years ago by a passing comet. “Now we see a very real example of what happens when a comet hits a moon,” he says. “In the case of Proteus, it doesn’t quite break it apart but breaks off a piece and there’s the Hippocamp we see today.”

The discovery of Hippocamp brings to 14 the number of moons discovered in orbit around Neptune. There are seven inner moons, including Hippocamp, along with six outer moons and Neptune’s largest moon, Triton.