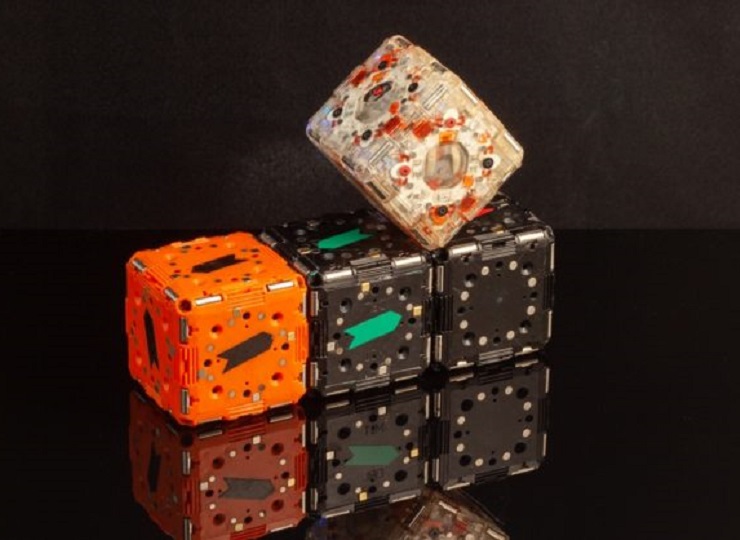 If you are reading this definitely you are either a tech geek or a huge fan of the ‘Transformer’ movie series just like us. When we watched the first Transformers movie, most of us wanted our cars and other machines to turn to some kind of cool robots, didn’t we?

Well looks like that dream is not too far away from being a reality, surely not after MIT has developed a set of self-assembling robot blocks that can identify and not only identify but can communicate with each other to assemble together and perform other different functions.

These Self-assembling Modular Robots, named M-Blocks 2.0, has a flywheel inside their core that rotates at 20,000 revolutions per minute and uses angular momentum from a break to move around. A built-in magnet used in the blocks helps them to stick to each other giving the blocks the capability to travel along other blocks, climb up or down each other, and even jump. They can perform tasks such as forming a line, following arrows, tracking light, and traversing down a path of arrows.

Check out the slick tricks and moves these 16 Robo-cubes in the video below:

The unique thing about our approach is that it’s inexpensive, robust, and potentially easier to scale to a million modules. M-Blocks can move in a general way. Other robotic systems have much more complicated movement mechanisms that require many steps, but our system is more scalable and cost-effective.

Researchers, in the future, are looking to upgrade these blocks to use them in a more practical manner. The future project focuses especially on the disaster response sector. The robots can form a temporary staircase to rescue someone from a burning building or a damaged basement.