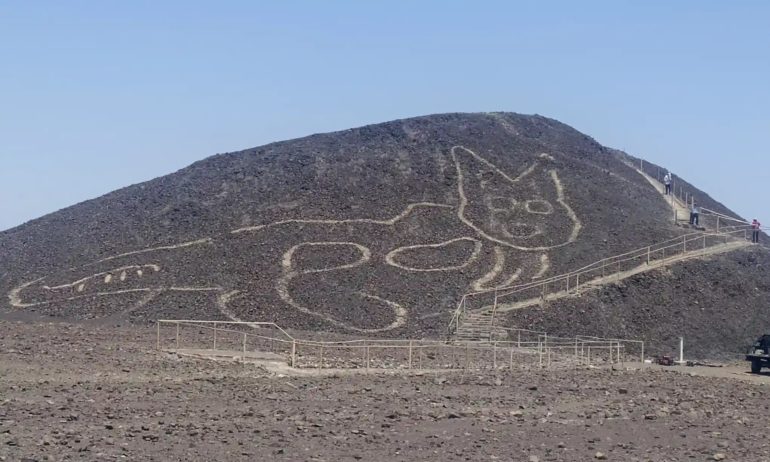 Image of a 2,000-year-old cat found on a hillside at the Nazca Lines site

On a hillside in Peru, archeologists found a large image that shows a creature pretty much similar to a cat lounging across the desert. The image stretches over 40 yards and is supposed to as old as 2,000 years.

The image is located at the Nazca Lines site which is a UNESCO heritage since 1994. This discovery is among various other cravings that have been found in the desert such as giant animals and plants. The site is around 250 miles southeast of the capital, Lima.

According to Johny Isla, Peru’s chief archaeologist the cravings were vaguely visible and were about to disappear because of its location on a steep slope which is prone to erosion.

Over the past week, the geoglyph was cleaned and conserved, and shows a feline figure in profile, with its head facing the front. It’s quite striking that we’re still finding new figures, but we also know that there are more to be found.

The designs are believed to be made by ancient Peruvians by scraping off dark and rocky layer of earth which contrasts with lighter colored sand underneath.

Over the past few years around 80 to 100 new figures had emerged which all predate the Nazca culture. Similarly the cat figure is believed to be created between 500 BC to 200 AD.