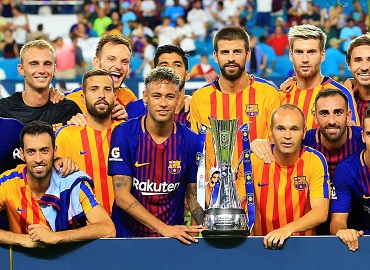 Barcelona proved to be a better team ahead of the new season as Barcelona secured a hard fought win over Real Madrid. Real Madrid surely missed Cristiano Ronaldo as he was not present in the team’s 2-3 loss. The match was played in a packed out stadium in Miami and produced a thrilling 90 minutes.

Almost every star player was present with Neymar, Messi and Suarez lined alongside which could be possibly the last time as Neymar transfer roundup is pretty much going to happen. This eventually showed Barcelona what they are going to miss after record fee transfer.

Messi opened up the scoring for Barcelona within just 3 minutes and the lead was doubled with Ivan Rakitic’s strike of Neymar’s assist. Madrid did fight hard as they were successful in equaling the scorecard with two goals from Mateo Kovacic and Marco Asensio.

The halftime break gave a Super Bowl similar experience with all the lights, music and fireworks. After that game started with no less excitement an intensity.

Into the second half, Gerard Pique set Barcelona ahead with his 50th-minute goal off Neymar’s free-kick. Barcelona were determined with their lead and gave no chance to Real Madrid to come back. The game was intense and was not like any other friendly that fans are bound to see.

It was the first time teams met since 1991 in a friendly match and only the second time outside of Spain.