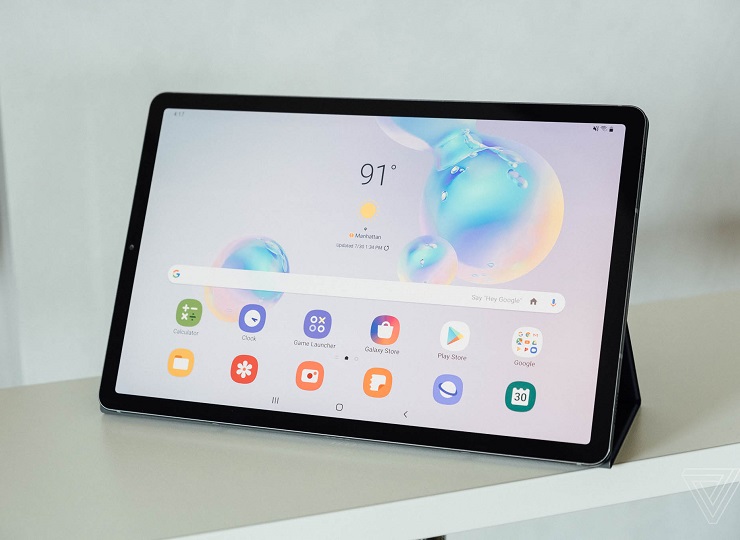 Samsung unveiled its latest Tab i.e. Samsung galaxy tab S6. A tab focused for both productivity and entertainment. This Tab is surely a competition for Apple’s iPad pro and Microsoft’s surface pro which are based on the same pitch as of Tab S6.

Like these devices Samsung galaxy S6 also houses a pen (included in the box) and it can be attached to an optional keyboard case too. For now this is the best tab Samsung has launched so far. It has a 16:10 10.5-inch OLED screen (2560 x 1600 pixel resolution), similar to the outgoing Tab S4, but Samsung has trimmed the bezels a tad to make the overall footprint smaller. It has also traded the facial recognition login system for an in-screen optical fingerprint scanner.

Samsung also dropped down a bit of thickness and weight to 5.7mm thick and 420 grams (just under 15 ounces). The tab has over all 4 speakers , two on each side when kept in landscape. Tab S6 comes with a Snapdragon 855 processor and a 7,040mAh battery that the company says is good for up to 15 hours of use.

Tab S6 has a dual-camera system with a standard lens and a 123-degree wide angle lens. The back is also home to the most interesting part of the tablet: a magnetic strip that lets the included S Pen stylus attach to the tablet. Like the iPad Pro and the Apple Pencil, the S6 can charge the pen when it’s attached and it even has a similar on-screen charging notification when you attach it. The S Pen stylus also comes with similar remote-control features as the S Pen that comes with the Galaxy Note 9 smartphone

Samsung has redesigned the keyboard attachment to include a small trackpad. The keyboard, which can be purchased for an additional $179, connects to the tablet through a set of pogo pins on the left edge of the Tab S6. It can be detached separately from its back cover, which also acts as a kickstand to prop the tablet up.